Jason Rivera is a Southern California native who started photography documenting cycling culture at age 19. During his mid twenties he left the united states and traveled many parts of the globe to focus on a photo book project named “Meet Me In”. When he came back to the states, The decision was made to focus on photography full-time. This venture led him to shoot many different independent and commercial campaigns, from look books, product photography, portraiture, and inevitably fashion photography. During the fall of 2021 his street photography landed him the 35x35 bicentennial award for contemporary art given by Consulate General of Mexico in Los Angeles.

Currently, he spends most of his time at his photography studio named Studio Stupendous. Opening a storefront has led to many opportunities that give Jason the ability to help the local community of artistic business owners. One of his main goals is to own a space for young creatives to learn the business side of art and open the doors to a business model that matches their artistic abilities.

As he juggles his daily schedule of managing a storefront, educating his assistants, and producing fashion editorials for various magazines JayRiv enjoys his free time riding bicycles, lounging with friends, and making music. At the age of 30 he continues to seek new avenues to create, especially now that he is a Champion of Light. 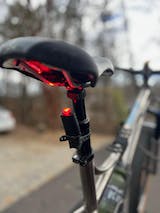